Grow in the Dark 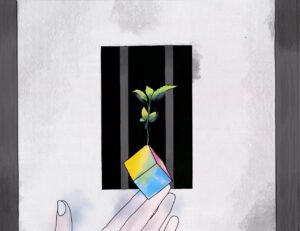 Digital colorized animation with Bitcoin-tokenized certificate of authenticity (COA). Made up of 318 individual black-and-white frames hand-drawn by Ross in prison.

What began as a desire to track the development of my plant became a much bigger project. What are its surroundings? A cell? How did we get there? Am I there too? I played it over and over in my mind’s eye, imagining how it might look. However, I had no idea how laborious a little animation could be. A book light under a plastic bowl was my light. A marker pen, some basic geometry and sustained focus for many weeks. Oddly, I won’t see the animation myself, not unless I defy the idea it conveys and leave this cage before I grow old and die.